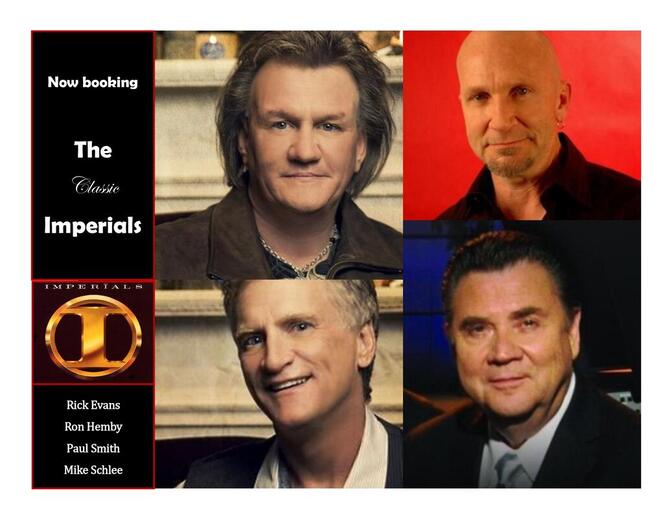 ​​Over the years, there has not been a more loved or celebrated group than the members of The Classic Imperials. Through the accolades and world-wide attention, our patriarch members have maintained their integrity in both the ministry as well as in their music. Through the decades,  they are known for their many hit songs including:  How Great Thou Art, Bread On The Water, He Touched Me, Trumpet Of Jesus, Praise The Lord, Lord Of The Harvest, Let The Wind Blow, Stand By The Power and many more.

Rick Evans  - Lead/Tenor
Rick Evans, CEO and Manager, has been in full-time ministry since age 22 and a member of The Imperials since 2005. He was a member of Dennis Agajanian Band for 13 years and served as a featured team member at the Franklin Graham Crusades. Rick has been around the world with some of the largest ministries including Harvest Crusades (Greg Laurie), Promise Keepers and Billy Graham. Rick has a degree in Human Development and uses his experience and education to counsel, consult and teach the Body of Christ and organizations who are trying to reach beyond the four walls. Rick also shares a ministry with his wife, and keynote speaker, Debra Evans. www.livinginfaith.com

Ron Hemby - Lead / Tenor
​Ron Hemby is known, by many, as one of the finest vocalists The Imperials ever had. Ron, along with the other team members, helped The Imperials usher in a more "rock" sound with the release of the 1987 album This Year’s Model. Ron's featured voice on "Power of God" became the theme song for the world-famous Power Team and a generation, of younger fans, who began to return to The Imperials concerts. Ron went on to sing with the Buffalo Club and is currently with The Eaglemaniacs, as well as a worship leader for River Of Life Church in the Nashville area.

Paul Smith- Lead/Tenor
Paul Smith is one of the most recognized members of the famed group since 1982. He is an accomplished singer/songwriter and worship leader with a string of number one hits, including three Dove Awards and one Grammy. He is was also inducted into the Gospel Music Hall of Fame. Paul’s return to the group has created a burst of enthusiasm about the continued success of this organization. From the first note, more than 20 years ago, he remains one of Christian music’s most beloved icons.

MIKE SCHLEE/BASS
Mike’s music career began in 1962, as a touring member with several West Coast based Southern Gospel quartets. His legendary bass voice has been featured on radio, television and countless concerts including numerous appearances on The National Quartet Convention. When not performing, Mike pursed a business career and held numerous executive positions with Fortune 500 companies. Mike’s solid Christian values, vocal range and business acumen are a welcomed addition to The Imperials.